Hops was given his breakfast for climbing on the stool and balance disk. I started with him climbing on the disk to get to the stool then just the stool itself and he can still get all four feet up on it! Next we tried the name game with canned food as a distraction, no problems there. Then I offered the nose loop to him and he put his nose through every time, never tried to go around it, smarty! I also put a cape on him a few times and fed him for it. He was not sure at first then had no problem. We also did some sits, downs and stays, same way as yesterday. He is definitely offering sits more! 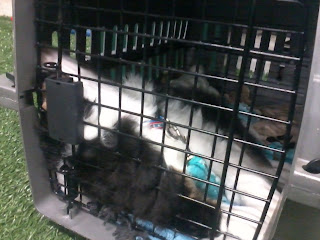 Hops did very well riding in the crate to the vet, only a little whining. He loved being passed between the receptionists at the vet and did great with all the handling from the vet himself. Then he got to meet Desiree and Pace, I think they will end up being good friends! Pace just loved him :) He was not happy at all when I put him in his crate so I could set up for nose work class, when he finally quieted, I let him out. He was handed around again, this time to my agility class. I held him for awhile then he slept for over an hour for the rest of class. Dog's barking, teeter banging, did not bother him one bit! 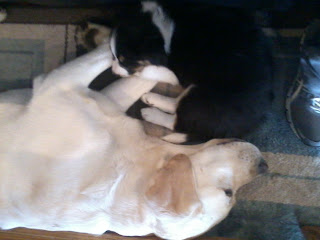 We played tug when we came home, starting the "live toy/dead toy" game. Once he was playing well with one toy I held that one still then made another come "alive" by wiggling it around until he dropped the first toy and played with the new live toy. He took a little while to drop the first toy but got better as we played more. Then I took Hops outside by himself and walked around the yard. I fed him every time he looked up at me and pretty soon he was heeling next to me on the right and left side. I also ran away from him a bunch of times, calling him and feeding/playing when he reached me. Next I brought the boys out so they were walking around too. Hops did not look at me much at first but then got the game and started heeling with me even though the boys were there too. Smart puppy! Next Hops did sits in between my legs while I did recalls with Rice then Dillon with the manners minder. At first I held Hops and fed him when Rice ran towards and away from us, soon he was able to keep the sit himself and started offering to look at me. We came inside for some more tug and now he is out! 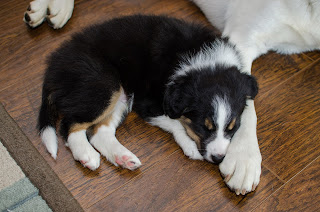 Hops did amazing at work with me in the evening. He was passed along to probably 30 different people and loved everyone new he met. He is such a sweet puppy. After being held in the beginning of each class he then fell asleep in his crate, once again sleeping through barking dogs, doors closing, and the teeter banging.

Hops was super happy to see Jeremiah when we got home. Jeremiah played some fetch with him then I gave him two food toys while we ate dinner. Hops had a blast with them! They kept him busy and me entertained for quite awhile :) He was still hungry after his toys so we did some sits and releases for some canned food. I am still just waiting for the sit, then tonight I said release and fed him in a stand.

Hops's discoveries: Door stops are fun! Leaves are pretty cool too! Food toys are fun to growl at and play with!

On going lessons: The black dog's tail is NOT a tug toy! Pottying outside is good (no accidents today), it is okay that something is trailing behind you (leash).
Posted by Unknown at 11:35 PM