Hops has had 3 lessons/play sessions so far today. Lesson one was when we arrived home. First he got to explore the living room and was introduced to Rice and Dillon. He was a little unsure at first but quickly became comfortable with the big boys. Rice already *loves* him : ) Hops got some canned food when we put collars and his super hero cape on him. He fussed with the first collar but did not mind the cape at all! He also was fed for putting his paws on a balance disk and on a stool, for coming when called and for posing for the camera with the boys : )


Nap time, then lesson 2 came when my best friend Renee came over. Jeremiah, Renee and I sat in a circle and called Hops between the 3 of us, rewarding him each time he came. 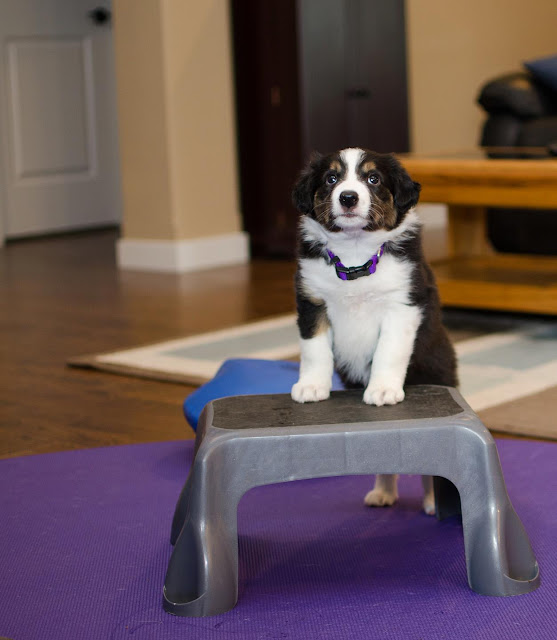 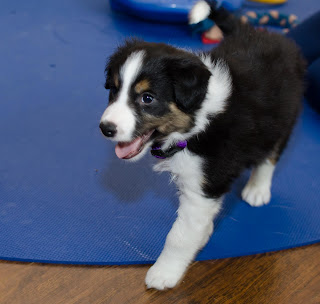 Nap time again then lesson 3. Come when called between Jeremiah and me, walk on a mini teeter, put paws on balance disk and stool. He got all 4 feet on the board, stool and disk, what a smart puppy! After that he went outside with everyone for the fist time. He was a little leery of the wet grass but was soon sliding around on it, having a blast! He also peed outside for the first time, good puppy! We came back in and toweled him off (no problem with that) and he did some more exploring and playing and is fast asleep once more. Good puppy! 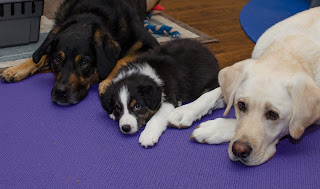 After the nap Hops peed outside again then we played a little tug and fetch. Then he did more posing for the camera with Rice and Dillon (down stays) and did his fist puppy pushups! Down, sit, stand, all easy for Hops! Then he was out again!

Last training session: Hops got part of his dinner while on his back with Jeremiah fiddling with his toes, followed by more tug, then the name game, sits and climbing on the stool (he got all 4 feet up all by himself!). He is one fun, smart puppy!

Ongoing lessons: Biting down on humans causes them to yelp (he does not like that), going potty outside or in litter is very good (no accidents today!) and do not climb on the black dog : )
Posted by Unknown at 7:15 PM