Hops seems to have more energy every day. We played two long games of tug this morning. First tug-sit-tug (still just waiting for a sit) then live toy/dead toy. Boy he loves to tug! We then did a little heeling around the house on right and left side and did pushes and pulls. We then worked on puppy pushups. At the end of the session I put a harness on him for the first time. He ran around trying to get it off but settled quickly and worked on some new food toys. He has now had 4 different types, a kong, a twist'n'treat, a tire and a small hollow ball. He was able to get food out of all of them. A little later I saw him do puppy zoomies for the first time. Zoomies are so cute! 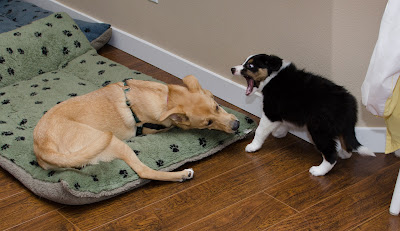 Hops had his first play date today. My friend Renee and her puppy Taffy came over. Hops was unsure at first (Taffy is bigger and was very excited : ) but he quickly became comfortable and played and played and played! The chased, they tugged, they wrestled, how fun! 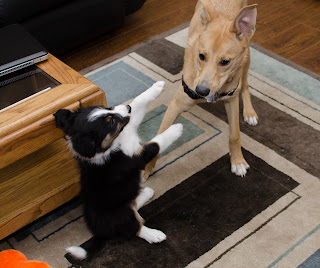 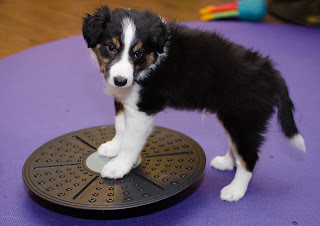 We ordered a small tunnel and a different type of balance disk for Hops and they came today. As soon as I put the disk on the ground Hops pounced on it! No fear! We had a short session of putting his paws on the disk for kibble then had him running through the tunnel to play tug with me on the other end. Fun! 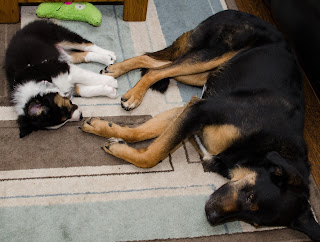 Rice played with Hops without a toy for the first time today! It is pretty cool to watch a 60 lb dog gently mouth wrestle with an 8 lb puppy! Good boy Rice! Dillon on the other hand would like nothing to do with Hops so we have been making an effort to reward him whenever Hops comes near him and really reward him (and remove Hops!) when he jumps on him. This has been helping and Dillon is getting better.

Hops had his first "It's Your Choice" lesson today. I started by holding a treat in my closed hand, waited for him to pull away then marked the behavior with a "yes" and reward by handing him the treat. I did that a few times then raised criteria by waiting for a sit. He quickly started to offer sits and I alternated rewarding in the sit and by saying "release" then tossing a cookie on the ground to reset him. After a few reps I raised criteria again by opening my hand when he sat. If he got up I closed my hand, when he sat again I opened it. When he stayed in the sit with my hand open I rewarded. In just a few reps he could stay in the sit while I moved the treat a few inches away from him. He is so smart! I then practiced some heeling with all 4 basic (agility) turns (push/pull/front cross/rear cross). He did great and also did some nice heeling for Jeremiah. After lessons come naps! 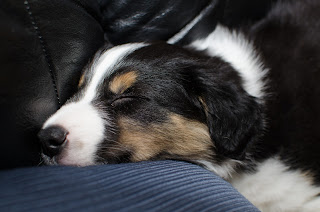 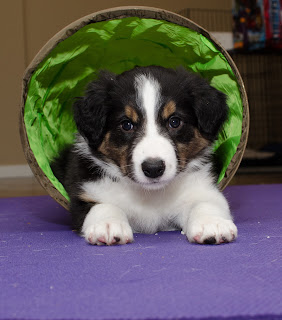 Later Hops showed off his balance and tunnel skills to Jeremiah and we played some live toy/dead toy with udders. He is really good at the game now, letting go of the first toy as soon as the second toy comes alive. He will also offer a sit quickly if he lets go and I do not give the toy right back. He is now chewing on and talking to the udder : )