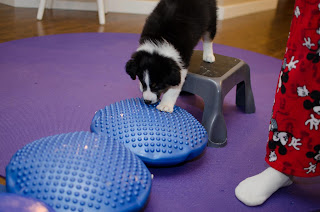 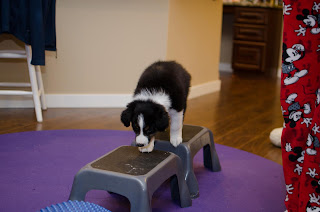 Hops started his morning by playing tug and climbing on stools and disks.Then we went to work and he played on a bosu ball for the first time. He easily got all four feet up on it and was able to keep a sit on it. Hops once again loved all the new people he was passed along to, there were around 2 dozen. He got to meet a couple friendly adult dogs. is favorite was the BC Eli. He once again did great during classes, sleeping in his crate or chewing on toys in it. Before we left work I did a bunch of recalls with him, running away, calling him and rewarding him in heel. He came running every time. I also did a little heeling and he did great, offering lots of attention. After work he went to the vet for his first shot (did great for the exam and shot) and we did a bunch of pushups and hand targets on the metal vet table while we waited. He then was carried into the bank to say hello and carried into Mudd Bay to get more canned food. He did great in each place.

When we got home from work Hops and I played a little tug then he was out! 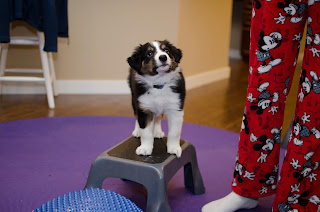 When Jeremiah got home we had a posing session, having Hops climb on stools and 3 different types of balance disks. He was also able to get all four feet in and on a plastic bowl. If he fell off anything he just got right back up again! We both then took turns playing tug/sit/tug and live toy/dead toy with him. 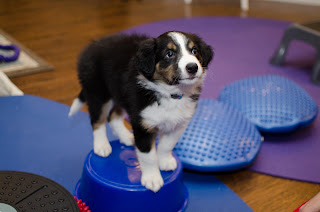 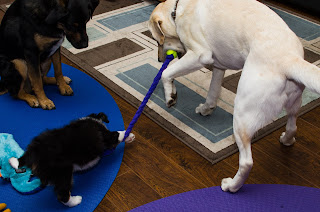 I was writing this blog when Hops came over and invited me to play (brought over toy, play bowed and sat, wow!). So we played! We played tug, then had a long session of rewarding Dillon when Hops interacted with him. Then Jeremiah started teaching Dillon to touch Hops for a treat. Dillon picked up on the game pretty quickly! While they played that game Hops and I played It's Your Choice. I started with the treat in a closed hand, waited for a sit, opened it, closed it if he got up, etc. Pretty soon he was making very few mistakes. I continued to alternate rewarding him in the sit and releasing him to the cookie. He is really understanding the release word now, getting right up to get the cookie with no prompting. Smart puppy! I raised criteria by starting with an open hand, then by adding some distance (up to 6in), then by lowering my hand toward the ground (I got about half way down). He was quick to pick up on the changes and keep his sit until released. I then changed to sit-release-sit, adding the cue sit for the first time since he was offering it so quickly. Out of a dozen reps he sat 11times when cued and released all 12 times when cued. So smart! We then did some hand targeting. He moved to and touched my hand 11 out of the 12 times I offered it. We then did some more tug for the video camera.

Here is a video of live toy/dead toy. By the time we took the video Hops was running out of steam but you should get the idea. He is usually much more into it!


As the night progresses, it seems we may have created a monster with teaching Dillon to touch the puppy for a treat. He just woke Hops up by nosing him then wanted a treat! : )
At the end of the night, when Hops was very tired, we clipped his nails for the first time. I held him upside down in my lap and clipped and filed while Jeremiah fed him. He was a very good puppy, a little fussy but not much. He is sleeping soundly now.
Posted by Unknown at 12:15 AM