Jeremiah started Hops’s day with a get out of the kitchen and stay out of the kitchen lesson while I made breakfast. He did great, Jeremiah was able to get a good 15ft away from him in his sit or down say. It helps that the other boys were saying right next to him but still, what a good puppy! 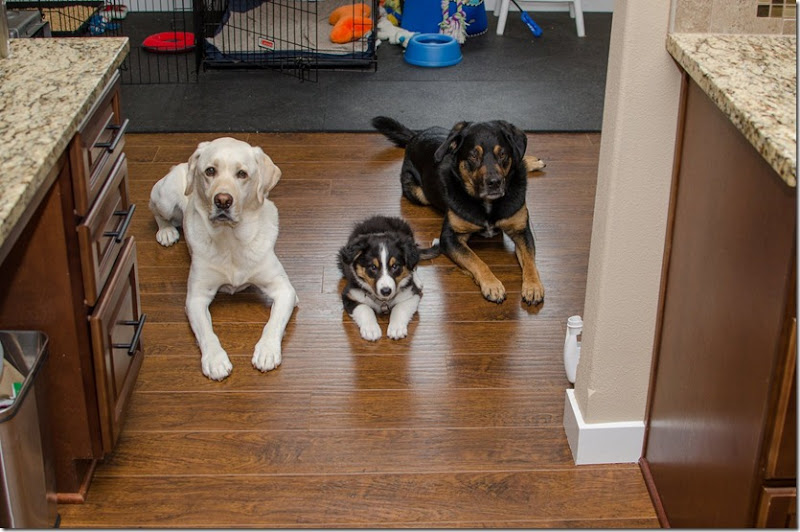 I took Hops on his first walk around the surrounding neighborhood this afternoon. Before we left the drive way our neighbor drove up and stopped and he met her and her schnauzer. So that was a new for him, meeting people and dogs in a car and he handled it very well. From our house you have to cross a busy street to get to a nice place to walk so we started just by standing 15 feet from the road and I treated him when cars passed by. He did not respond to the cars at all there. When I moved closer, eight feet or so, he watched calmly as the cars went by then refocused on me. We crossed when there were no cars and he did well with that. He was a little unsure on most of the walk, I need to be sure to expose him more to new environments. I had him on his harness so I did not care if he pulled at all or if he was ahead or to the side or behind. What I did not allow him to do was switch sides on his own.I had him walk on my right going out and my left walking back home. Most of the time he walked by my side and offered attention and was rewarded in heel. I watched for open garage doors and loitered around when we came across them. By doing so we met three adults and five kids! The first family had two girls and a boy and they all petted Hops. He was a little overwhelmed as these kids moved faster and were louder than he kids he has met so far. He got lots of treats for them being there! The next family had two boys, who of course stomped toward Hops in big boots! Lots of cookies again for Hops! He did pretty well but I definitely need to find some more kids for him to be around!

Hops stayed with Jeremiah when I went to work and they worked on stays. Jeremiah was able to get about 30 feet away from him! Very impressive!