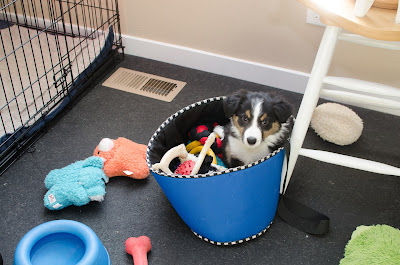 Hops started his morning with a crate shaping lesson (using the i-click). I began with the large crate I used last night. He started offering to go in right away and would offer sits and downs while in there. I started closing the door then opening it and rewarding him for remaining in. He only tried to get out before being released once out of 8 times (when he got up I just shut the crate door then waited for him to sit before I opened the door again). We then switched to the small crate. It took a few clicks for him to offer to go all the way in but then he got it. After he had offered to go in six times I started to close the door. Well he had a lot more trouble staying in this crate when I opened the door. When I released him he was much more distracted by his surroundings and did not offer to go back in the crate right away. Because of his behavior I think I moved too far too soon and should have rewarded more for going in. This crate is more difficult because it is the one he has had to stay in. We then did sits and down. With the sits I added the cue right before I knew he was going to sit and he sat every time. With the downs I said down right before I lured it (I lured because I wanted the down from the stand, otherwise he would sit first. We played some tug to end the session.
Before we left for work I did a bunch of recalls in the yard by running away and rewarding him when he came to me. He always came. I did this until he started slowing down and then he was wonderful at work in the afternoon, he slept the entire class : )

Once again, before we left for work again I did a bunch of recalls in the yard by running away and rewarding him when he came to me.He was once again tired and slept through the first 3 classes. He went potty outside, was passed around and got to walk around between classes. He is getting braver with bigger dogs and of course loved all the people. He was awake for about half of my last class. He did some great recalls and heeling with me, following me around to set bars. He was passed around, had a short play time with an adult aussie, and met a couple of the other dogs in class. He was a very good puppy. I also weighed him before we went home. In one week he put on 1.7lbs! That makes him a solid 10lbs now! 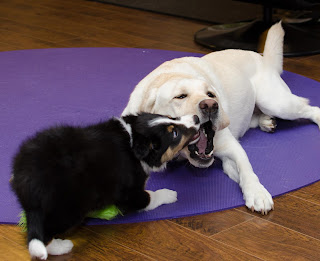 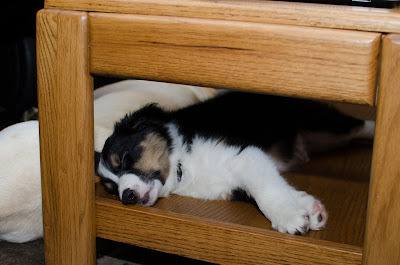 
He is now sleeping soundly in his favorite sleeping spot!
Posted by Unknown at 12:19 AM