Hops had another shaping lesson with the small crate this morning. It took about a minute of waiting before he made a motion toward the opening of the crate (he did offered other things). When he finally looked into the crate I clicked and rewarded inside the crate. I released him and after sitting for a moment he walked all the way in. He offered to go in a dozen times, the last 4 without offering a sit first and I said kennel as he was going in the last 4 times. Next I did a dozen short recalls. When he came I held my hand down by my leg and when he got to it I touched his collar then rewarded him with the other hand. I want him coming all the way in, not sitting out of reach, and I want collar grabs to be a good thing. Then we did a dozen position changes, saying the position, clicking and treat when he got into it. I ended with having him put his nose through a head collar 6 times. I am having it rest on his nose while he eats then removing it right away.

I had to leave Hops home for a few hours today. I exercised him before and gave him chewies and food toys in his X pen. Dillon was in the crate next to the pen. He seemed just fine when I returned and was of course very happy to see me! We ran around the backyard for a little while then I picked up the yard. He is getting much better about not trying to bite the pooper scooper! Yuck! 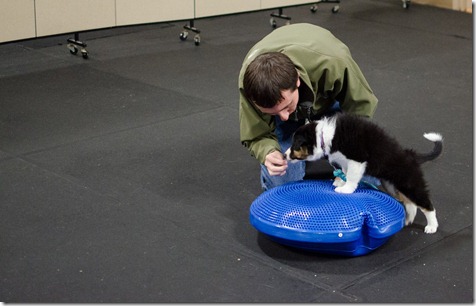 Hops had his first preschool class today! He was a confident puppy, not afraid at all when the bigger puppies came up to him to play. He easily got on all 5 of the different balance disks and did well with the impulse control exercise. He was happy to see both of his sisters, Love and Coleen and was extra happy to see Elinda: ) He had wonderful focus, being able to pay attention to me even with other puppies running around. Jeremiah was the one to work him through the exercises and he did wonderful for him as well. Fun class, we are looking forward to next week!

Hops ended the evening with a major play time with Rice. We though we might have a flattened puppy but Rice was *mostly* gentle and Hops is a tough puppy!