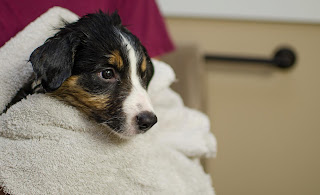 Hops pooped while on leash for the first time today! I put him on a long light line so he could still move away to poop. Hops then came inside and played for a little while with Rice before I took the boys to their trial. Hops spent the morning at home then Jeremiah brought him to the trial for a visit. I was very happy with how Hops handled the environment. The noise did not seem to bother him one bit, he was happy to meet every new person, and he remembered people he had met before! He also met his first little kid (2-3ish) and was calm with him. Everyone loved him and he was a big hit! 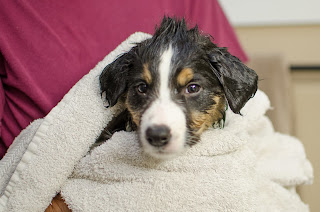 When I came home from the trial we moved the dog walk and Hops played on the down ramp (on the ground). He loved walking across it and had no problem with the tip at the end or beginning!

We clipped and filed Hops's nails again today and he was fussier than the first time though he would settle down. We then gave him his first bath. He did not mind being in the bath tub, did not mind a little bit of warm water in the tub, showed some interest in the water coming out of the shower head, but he did not like being bathed! He was still pretty well behaved, just a little whiny and he tried to get out of the tub a a few times. He looked cute and pathetic at the same time! 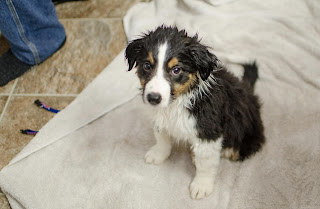 When I tried having him poop while on leash tonight when I knew he had to go, I gave him less leash (10ft) and he threw quite the tantrum! After fussing for quite a while he finally went. We definitely need to put him on leash more!

We played tug with many different toys tonight but only did one formal training session, shaping Hops to go into a crate. He is so smart that it only took 4 clicks for him to understand I wanted him to go into the crate. The first click was for looking at the crate (he first offered a sit), the second click was for moving toward the crate, the third for getting his front feet in and the fourth for getting all the way in. After each click I rewarded him in the crate then released him out. I also rewarded him for coming out of the crate when I said release. He offered to go into the crate 6 more times before loosing focus (it was late and he was only a little hungry). I did nothing other than look at the crate. Shaping is so much fun with such a smart puppy! Also, I did this first lesson with a big crate that he has not been left in.
Posted by Unknown at 11:53 PM