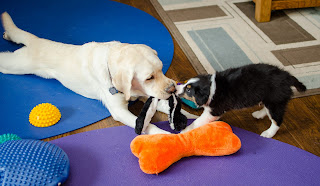 Hops started his morning with a walk around the yard. Dillon definitely likes him more when there is more space. Hops is brave enough to go pretty far away from me but comes running as fast as he can whenever I call him.

When we came in we played tug sit tug, adding a little It's Your Choice. Once he sat, I slowly moved the toy away from him (only about a foot or so), pulling it up if he got up and releasing him to play if he kept his sit. Then he and Rice had a good game of tug too.


I little later we played It's Your Choice with kibble. We did 24 reps, 18 in a sit, 6 in a down. I was able to get my open hand about 1.5ft away from him. He kept position 75% of the time and released on the 1st cue 100% of the time (I rewarded him in position about 1/2 of the time). The only verbal cue in this game has been release. After a small break we did 24 reps of hand touches. The first 12 were done without a cue, just my hand presented and he touched it right away 11 times out of the 12 times. For the last 12 I added the cue touch when I presented my hand. He touched all 12 times. I was sure to vary where my hand was and which hand I used. He had no problem turning away from me to touch, the only one he missed was high and he was sitting. When I represented a little lower he got up and touched it. A friend asked how I keep track of reps, one way I do it is to count out the number of treats I am going to use. If he gets one wrong and does not get a treat I set that treat aside. How many treats I have left over is how many failures there were. 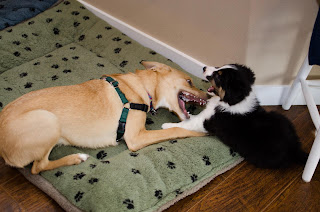 I think it is just as important if not more so, to be training in "real life" not just in training sessions. For example while I was stuffing kongs today, all 3 dogs were doing very nice, calm and quiet down stays, all getting small licks of the stuffing every once in awhile. I have also been starting to wait for a sit before letting Hops out of his Xpen, out the backdoor (when he does not really have to pee :), before getting on the couch and for being picked up. On the potty training front, Hops is making few mistakes and is going quickly when we take him out. I have been saying "hurry" his potty word while he is going potty all week and have started to say it as soon as he hits the grass when I know he has to go. Something I need to do more of is to take Hops potty on leash. He will pee when on leash but can get quite fussy if he does not get to run around before he poops!

Before we left for work Renee and Taffy came over to play again. Hops was super excited to see both of them! They played and played and then I had a tired puppy that slept at work!

Hops had another big day at work with me. He is much braver with big dogs now. He even held his ground when a huge (and sweet!) berner ran toward him to say hello. He is getting more comfortable with big barks was again able to sleep though a lot of noise. He was passed to many new people and once again was happy to see them all. He showed off his new It's Your Choice, hand targeting and push up skills and even did a recall to heel demo! Wow! He slept during the 1st 3 classes then was awake for the last class. He was pretty good though about lying down and chewing on his food and chew toys.

When we got home, Jeremiah did a touch lesson with Dillon and Hops. Dillon is getting very good at touching Hops! Hops got the last of his dinner in food toys while we had our dinner. I have been putting him in his Xpen a little bit more so he can get used to not always being where he wants to be. He is already getting less fussy about it.