Hops had a short cuddle session with me this morning then he stayed with Jeremiah for the morning while the boys and I went to a trial. Dad says he was a good puppy.

Hops was very excited to see me when I came home. He was in his Xpen so I used the moment as a training opportunity and waited for a sit (it took a few moments he was so happy) then I let him out and loved on him :) We went outside next (of course!) and after all the dogs had pottied we all ran around the yard together. Hops came after us whenever we changed directions and boy can he run already! When we went inside we hand wrestled for a few minutes then played tug. Every time he lost the toy I waited for a sit before releasing him back to it. As the game went on I started moving the toy away from him once he sat. If he stayed I released him to come play, if he got up I raised the toy out of his reach. By the end of the session I was able to put the toy on the ground before releasing him. He also immediately got up to get the toy every time I said release. I was working in a room with no other distractions but if he made a few mistakes in a row he did not have a very long attention span. I was easily able to reengage him however. When his puppy brain allowed him to focus you could see him thinking. Very cool. 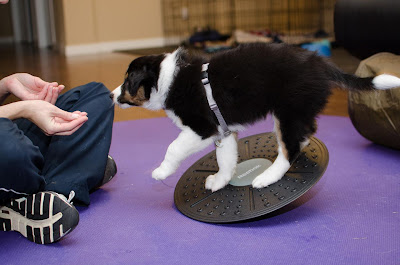 A little later I did a shaping lesson (with the i-clicker) with balance disks. At first I was not getting many behaviors to click, I clicked a couple of nose touches to the disk but did not want that to be the end behavior so I did not continue to click those. He was offering sits and downs and looked pretty sleepy. I almost bagged the session when I remembered I can manipulate the environment. So I surrounded myself with balance disks so he would have to interact with them to get to me. He quickly started offering to put his paws on the disks and I was soon able to move the disks further away so he could reach me without touching them and he still interacted with them. I clicked for him putting his front paws on the disk, treated him on the disk then released him and tossed a cookie on the ground to reset him. At this point he was immediately returning to the disk and putting his front paws on it. At the end of the session I did not release him off when I rewarded the front paws and he offered to put all four paws on it! He got all four paws on four different times. Amazing puppy! 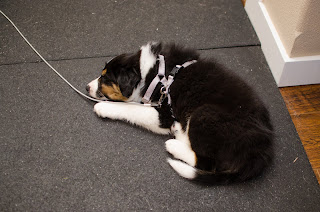 After a potty and chase mom around the yard break Hops had his first tie down lesson. Being able to be calm and quiet on a tie down (crate/car/down stay etc) is a very important behavior to me. I put his harness on so he would not hurt himself if he threw a fit but he was very calm. He sat at the end of the tie down for a little while, putting light pressure on it and looking quite unhappy, but he was quiet so I was happy! I rewarded him when he stopping pulling and he soon fell asleep and stayed asleep while I did a sink full of dishes. Good puppy!

Hops was left in the Xpen when we went out to run a couple of errands (Rice and Dillon were home with him). He once again seemed fine wen we come back and his food toys were empty so that is a good sign as well. He had two more tie down sessions, one while I did laundry and another while we ate dinner. Both times be pouted a little then chewed on his toys and fell asleep. I did have to spray the tie down with bitter apple as he was chewing on it.

Later I did another clicker lesson. First we heeled around the house, doing pushes and pulls, he is getting really good at heeling. Then we played with the balance disks and this time he was all over them. Then we did downs to stands to downs to stands etc. Next was some it's your choice and hand targeting then we ended with a long game of live toy/dead toy with 5 different toys. He showed no preference which is great. 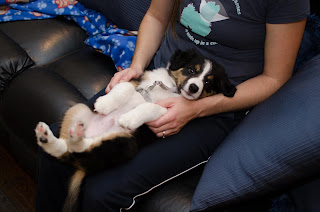 I also did some more body handling. I had Hops upside down in my lap, fiddling with his feet, tail, ears, eyes and mouth. He became very fussy at times but relaxed pretty quickly and I treated him when he did. He was also brushed for the first time today and did fairly well. Handling is something we need to spend more time on! 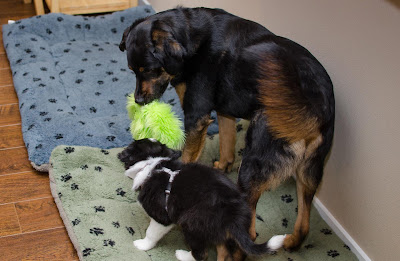 Hops had one more training session, showing off his it's your choice, hand targeting, balance work and body handling for Jeremiah and his camera. He put on a good show! 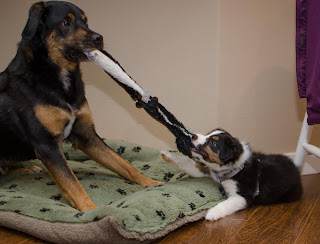 And then, Dillon played with Hops! Woohoo!
Posted by Unknown at 10:21 PM