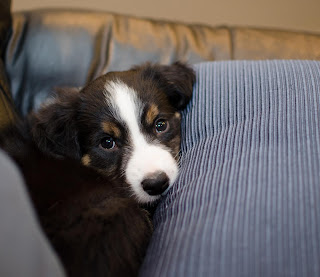 Hops slept the whole night! Wow! What an amazing puppy! We played the name game for his breakfast then he spent the day playing with Jeremiah while Rice and Dillon and I went to a trial. Jeremiah reports that he pottied outside all day and played lots of tug and fetch!

Hops was sure happy to see me when I got home! Sweet boy! We played some tug, and now when he drops the toy, I wait for a sit before playing again. He offered sits pretty quickly. Next Jeremiah and I called Hops back and forth a couple of times in the yard, then Hops had a lesson about waiting your turn : ) He had to stay in my arms while the boys were called back and forth. He was pretty good, still responding to his name even though he was distracted by them. When I placed him on the ground it took him a couple of seconds to hold still before I could reward him, when he held still again I let him go.

Next training session we worked on sits, sit stays and releases. I am just waiting at this point and when he sits I feed him. After a few rewards for sitting he started to offer it as soon as he got he got his release cookie! Smart puppy! For the stay piece I just rewarded him several times before he got up and then released him. I also added in a distraction to the name game. One hand held kibble away from me, when he responded to his name and turned away from the distraction he was fed with the other hand. He got the new twist in the game quickly! Then family arrived and he got to play and socialize with my parents and brother. Fun! 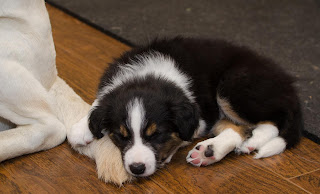 Today's last session covered a variety of things. I started with shaping/luring him to put his nose through a head collar loop. I held the food on the other side of the loop but did not reach through and lure him. He tried walking around both sides and when he decided to try going through the loop I rewarded. He got to the point where he was offering to put his nose through the loop as soon as I presented it. Then I worked on classically conditioning some things, pick up paw, give food, touch ear, give food, touch collar, give food, drape something over him, give food. He did very well with everything tonight and is now sleeping soundly!

Hops's discoveries today: Air coming out of vents is fun! Udder tugs and tire tugs are fun! There is a dog statue in the living room! Reflections are interesting! The white dog will tug with me! The black dog does not like his tail being bit!

Ongoing lessons: All 4 feet must be dried off when you get inside, no amount of squirming will get you out of it! Only some things are chew toys. Still working on pottying outside (did great today, went every time we took him out), not biting down on humans, and not humping the black dog : )
Posted by Unknown at 10:29 PM