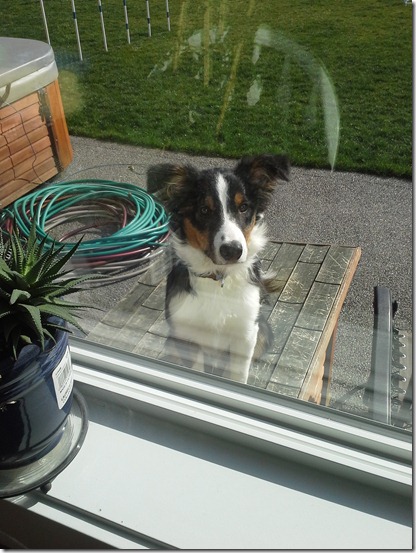 I let the boys out this morning and when I turned around to let them back in I saw Hops sitting on the dog house, staring in at me. Smart puppy!

Hops had a fetch session in the backyard before work, mixed with retrieving the ball himself and chasing Dillon retrieving a ball. We left for work afterward where he slept in the car during my first lesson. Before the agility class Hops heeled around the arena with me, doing a couple of chutes and tunnels but mostly just heeling and stays and recalls for cookies and tugs. One of the students brought her granddaughter to class with her and Hops went right up to her with no fear. He took cookies from her and went up to her again and again. Good puppy! He was then very good during the class with no fussing. When we came home for my break all three boys ran around the yard with their toys and tired themselves out. Good boys!

Hops went back to work with me for my second shift and slept in the car during the nosework class. I then brought him in and played with him for awhile before the next class started.We played lots of tug, I sent him around a big, round trash can to come chase me and play, had him down on the table then release to play, and he did short stays with release to play tug. We both had lots of fun! He then slept in his during during that class then came out for his fun and focus two class. He was really good during it, focusing on Jeremiah despite other dogs coming up to him. The class started with some time on balance disks and Jeremiah quickly shaped Hops to roll a cylinder shaped balance disk with his front paws. Pretty cool! Everyone then learned how to do rear crosses on the flat then tried them with two small sequences (two jump standards, RCOF, another standard then a tunnel or table). Hops was my demo dog and did great for me and for Jeremiah. Hops then demoed how to rear cross a jump standard and the rear cross sit stay then we ended the class with rear cross sit stays. After class Hops and Love and Gambit (and aussie) played chase and tug and wrestled around. Fun! Then Hops quietly watched the last class from his crate and ended his day with one more play time with Tessie the aussie and Rice. They had so much fun running around and around and playing tug with each other! We are home now and Hops is sound asleep!