Hops went to work with me this morning and had a short play time with me before classes started. He was good in his crate during the first class then had a ten minute walk around the building before the next class. That class was a fun and focus 2 and he was a stand in for his dobie friend who was injured. Hops worked really well for his new handler, never second guessing her or trying to get to me. He did rear crosses and front crosses and, tables and tunnels, stays and comes and was a very good boy! It was very cool to watch him work for some new without a problem. He was quiet in his crate for the rest of the day.

When we came home from work Hops and Sammy played hard then were crated while the boys and I went to agility class. When we came home Jeremiah said they had been good but Hops spent lots of time by the door, waiting for me to come home. 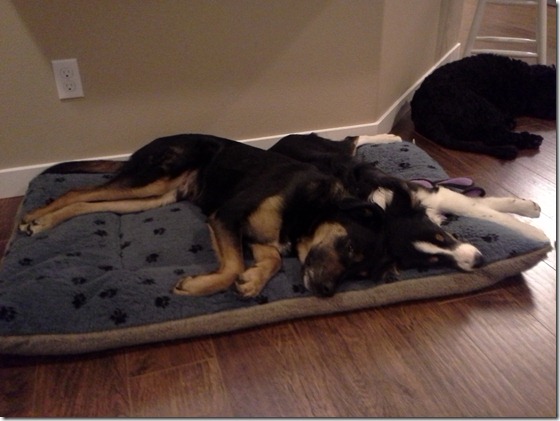 For his dinner I had Hops practice putting a variety of object into a basket. He was able to focus much better without the MM. I started with just working on the basket cue (put your head in a basket) no matter where I put the basket. The I placed the basket in front of me and tossed an object away from me. I asked him to get it and when he did I then said basket. He ended up putting all 11 items in the basket twice. The second time through I moved the basket so it was not directly in front of me. That made it more difficult for him but he still was able to do it. Smart puppy!