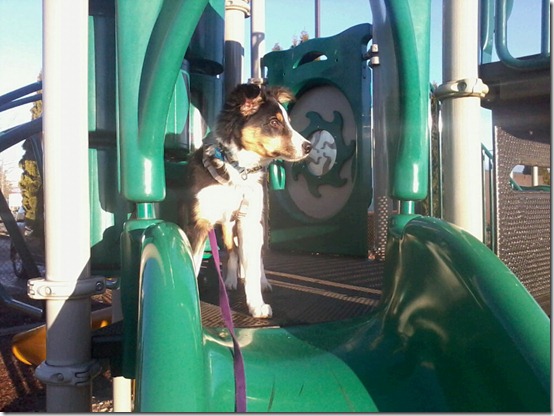 Hops went to the trial with us this morning. He was great in the car when driving and when parked and crated. He walked nicely around the parking lot with me and was even able to do stays and recalls with tugging as the reward. He said hello to a sheltie puppy, a German Shepherd puppy, a couple of springer puppies and a few calm adult dogs. He said hello to many different people, greeting those he has met before with extra enthusiasm and he spent time in other people’s arms too. He was such a cuddle bug with me at the trial. We would sit under the heaters, watching dogs run and he would just snuggle into me and relax! He is such a good puppy! On the way home from the trial I stopped by the Buckley skate park. Hops was still afraid but not as much as the first time. He was quickly able to walk around and do pushups. We walked away and played on the playground equipment then walked back and watched the kids skateboard again. I gave him a treat every time they made a loud noise and he grew more comfortable with the sounds. I am sure if we continue to condition him to skate parks he will get over it. The last stop on our way home was Pet Pros for dog food. He met a couple of small barky dogs and some new humans too. He climbed on whatever he could while we walked around and waited nicely in a down while I purchased the food.

I played some fetch with Hops in the bedroom, randomly rewarding every, every other, or every third retrieve and he continued to bring the ball back with enthusiasm, good boy!