I did some pushups with Hops this morning and ended up focusing on him staying in the down because he started popping up whenever I praised him! Goodness! So I worked on cuing the down, praising, then if he stayed down rewarding. Once he started doing that better I had him do more position changes and he was good with those. Then I worked a little on roll and he was rolling on a verbal cue after needing a hand signal for the first one. We then did some recalls outside, calling him away from the boys. He did alright but still needs lots of work with coming and staying away from distractions!

I took Hops to work with me and tugged and ran around with him before my first student arrived. He played well and also did great when I sent him around standards and through tunnels and the chute. I continued to play with him after my student arrived and started warming her dog up. It was more difficult to keep his attention as he wanted to greet them but he was able to refocus on me and play and go through tunnels again so it was a great distraction to work through! After work Rice, Dillon Hops and I ran around the arena. Hops is getting really fast and boy does he like to bark when he really gets running! 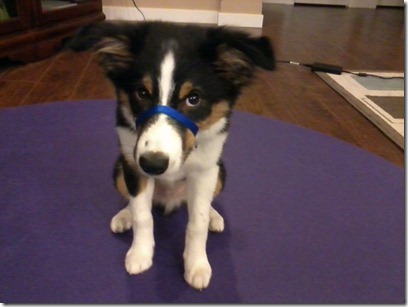 Hops had a long training session for dinner tonight. I started with perch work on a balance disk. He is continuing to improve and I was able to step in and have him offer to take side steps to get himself into heel. Right now he steps better to the right then to the left. Then we did a take session, first with the handle we have been working with then with a plastic measuring cup. He continues to improve with this too, and put the handle in my hands many times. He does not always get it there though, sometimes he just tosses it or walks aimlessly with it. When I tried the cup for the first time tonight he did great. He picked it up right away and when he gripped it by the handle he brought it to my hand better than the handle. Then we reviewed shaping him to put his head through a nose loop and then I hooked the head collar around his neck for the first time. Hops did not respond at all, just sat there looking at me for a treat just like he did when it was just resting on his nose. When I tried to heel around the house while he wore it he did fuss some, stopped and tried to paw it off, but he was able to work through it and refocus while wearing it. Good puppy! To end the session I brought out my old rally book and went through the signs with Hops. There are only fifty signs in my book, it does not have any of the new signs but out of the fifty there were only a handful that Hops needs work on! He should have no problem competing in rally!

A little later everyone had a session on the peanut. Hops loves it! He is big enough now to jump on it by himself and he can sit, down, stand, turn around, and give paws while balancing on it. Good puppy!

Later Jeremiah played tug with Hops, having him do sits, downs, stays, comes and it’s your choice with reward to play tug. They had lots of fun together! When I asked Jeremiah for a report on the session he said “He is good at mopping the floor.” Hops seems to like to roll on his back while playing tug and be drug across the floor : )

Hops did fine with the fire works though he did not love them. He was very aware of them but was willing to go outside and go potty even when there were all going off at midnight. And, he was willing to go back outside into the fireworks because he needed to go #2! Good boy for telling me and good boy for being brave!