This had been a tough, busy week with being out of town last weekend, Leland passing, and a long USDAA trial this weekend so I am going to condense a few days into one post.

On Wednesday Hops rode to and from work in the back of the car with Rice (wearing a seat belt) for the first time in my car. He did a great job and seemed to enjoy being up with Rice. He was perfect at work, quiet all day in the crate. He stayed home from the boy’s agility class to play with Sammy, a Portuguese Water dog staying with us until Friday. They are a perfect match and have been playing non stop every chance they get! 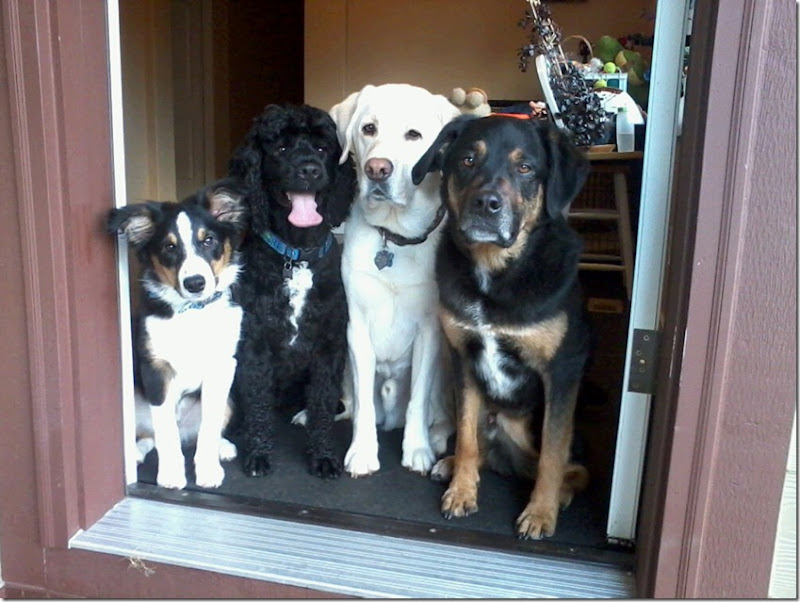 On Thursday Hops again went to work with me, and was very good for most of the night but was a little noisy at end. I was a long day for him. After all my classes were over Hops got to play with Riser, Seek, Cedar, Seamus and Rice for a little while and they had lots of fun!

On Friday Hops was left alone for a few hours (unusual for him) while I taught a workshop and he seemed fine when I came home, food toys empty. Taffy and Renee then came over for a play date then Hops stayed home with Jeremiah while I taught another workshop. He and Jeremiah played some fetch and he was good for his dad!

Saturday we had a USDAA trial and Hops of course went with us. As usual, he was great at trial, met lots of people, dogs and puppies and was very calm in the environment. On the way home he was fussy in the crate which is unusual but he had been in it a long time… I put a new bed in his crate tonight, a larger flat one, and he fussed and fussed until I put a pillow in with him! It seems he likes something to be able to lay his head on like Rice : ) He always has liked to play blanket monster!

Sunday we went to the trial again and Hops was once again great. He continues to love everyone new he meets and is ecstatic to see people he has met before. I was easily able to get him to play tug with his leash and to do sends around cones. He was again fussy in car but it had been another long day for him. When we got home I played some fetch with him but he is so into it now that I started asking for different behaviors before letting him go get the ball. He had trouble at first but then was able to quickly perform to be released to the ball. After fetch I practiced sending him around a tall stool to chase and play tug with me. Since he is pretty good at the post turn now I introduced the reverse post turn. He did pretty good with it. Then I gave him a new puzzle toy and he figured it out pretty quickly. A little later we played on balance disks, the peanut and the doughnut then we end the session with some perch work. Finally, he is tired! Before bed I filed his nails and brushed him and he was very calm for it. Good puppy!