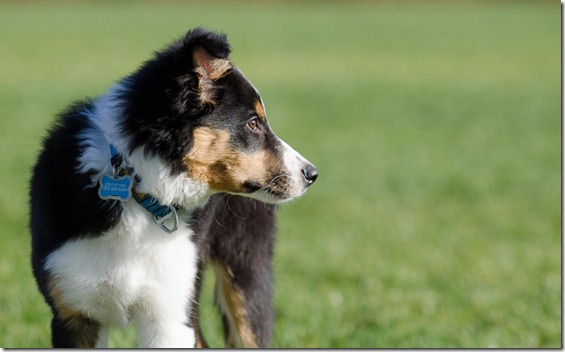 Hops had a big day today. It started with him going to the the trial again and as always he loved all the attention he received and was wonderfully behaved. After the trial Jeremiah and I took Hops to Home Depo where Hops was beautifully behaved and was petted by a 8ish year old girl with no fear. He wanted to say hello to her! Big progress! Later we took all three boys on a walk at Allen York Park in Bonney Lake. Hops was hit right away by what have been two of his biggest fears, a skate park and a little kid. The skate park was in full use and Hops noticed it as soon as he was out of the car. He stayed calm though, sat close to me while I finished putting extra layers on and watched and flinched a little at the loud clanging sounds. I gave him treats when the skateboards clanged. The trail we were head for was just past the skaters so we headed closer and I feed Hops as we went. Before we even made it to the skaters though, a little girl (3 to 4ish) spots Hops and runs straight at him! Hops did a great job, he sat and squirmed (and peed) but held his ground, did not run away. He was afraid but he wanted to greet her. She petted him and he allowed it and I gave him lots of treats! I was very proud of how he handled that, it would have been different a month ago. Next came the skaters and he has made big strides there too. He was calm and was able to walk to about 20ft away (we could not go closer because of a fence) and watch the skaters. I gave him treats at the clangs and he was able to eat them and do tricks for them. When we started heading down the trail, I could swear Hops was tracking the little girl. He was out at the end of his 20ft leash and with his nose to the ground in the middle of the trail and soon we caught up to them and walked with them for a little while. Hops was very interested in the little girl. He would walk next to her and watch her, then look back at me or come back to me for a cookie. Then he would go back out and walk next to her and stare at her again. I am not sure what he was thinking, but I know he was thinking. We left them behind after a little while and continued on our walk. Hops was very confident and spent most of his time out at the end of his leash (but nose up, not tracking anymore). He always came when I called him and I could keep him with me if I wanted to. When we reached the end of the trail and walked through neighborhoods, I kept him on a shorter leash. He handled the cars without a problem and was not afraid when a barking dog charged a chain link fence we walked past. On the way back through the woods, we took a detour off the main trail. To do so we had to cross a small (6-8ft) stream. There were logs going across it, so Jeremiah, Dillon and I crossed on the logs, Rice of course walked through the stream, and Hops remained on the other side, too afraid to cross either way. It took some encouraging, but Jeremiah and I convinced Hops to join us and he crawled across the logs to us. Good boy! On the way back he he did not think twice about crossing on the logs, but because he did not slow down he fell into the stream as soon as got on the first log. He pulled him self back up though and crossed the rest of the way without a problem. We stopped by the skaters on the way back and Hops definitely does not like them but he is doing so much better and is not afraid anymore. Good boy!

For dinner Hops was brushed which he was really good for, had the hair on his toes trimmed which he was fussy for, and had a training lesson which he was great at. I started with perch work and he did better than ever, then I brought out the paw pods for some shaping. He interacted with them right away but only with his front feet which he has done before. So I put all four in a line behind him knowing that would cause him to back and hopefully get his back feet on them. I clicked and treated a couple of times when he stepped on them while backing up then held out for some duration. When he had backed up and over the pods several times in a row with no click he stopped and looked me in the eye. I could just see him thinking, telling me that he backed up, why didn’t that work? Then he would try again and he would get his back paws on the pods and hold them there. Click treat! Good boy! We went through that several times before he was able to do it a little more easily. Then we did a bunch of things just a few times. Hand touches, roll, face, sit, down, stand, heel, side, front, finish, and heeling with side steps and pushes and pulls. He did a great job with everything.