Hops went to work with me and played with me in the arena before classes started. He did great tunnels and chutes and tables with the reward of chasing me and tugging. Hops was then very good during classes, quietly sleeping through most of the day even though he did not have food toys because of his tummy. I was very impressed. After all the classes he had a short play time with Rice, Casper the Papillon and Sadie the bichon mix.

Hops stayed home with Jeremiah while Rice and Dillon and I went to agility class. Jeremiah said he was a good boy : ) 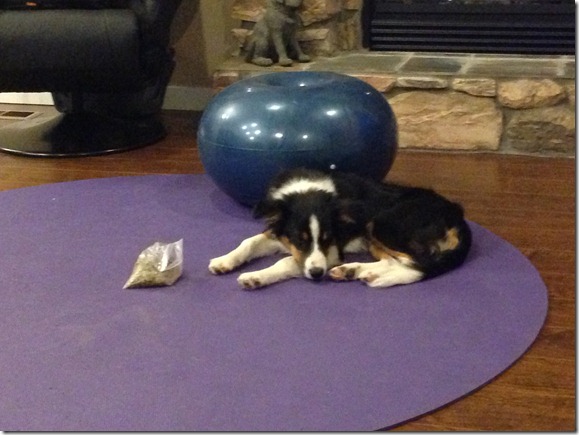 For dinner all they boys took turns balancing on the doughnut and peanut. Hops is doing great and still loves working on them. He lets me bounce him, pick up different paws, and easily does position changes. After his turn he then did down stays (rewarded often) while Rice and Dillon took their turns. He was fairly patient. After we were done he fell sound asleep right next to an open baggie of kibble! What a great puppy he is!