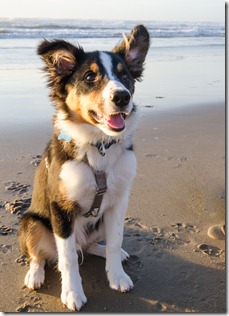 Today was the beginning of Hops’s first big road trip! Jeremiah and I drove to the Oregon coast to celebrate out second anniversary and of course brought all three dogs with us! Hops did fairly well during the long car ride. He fussed some but munched on toys and slept for the most part.

When we arrived at Cannon Beach, we parked then walked the dogs to the beach where we let them off leash to run and play. And run and play they did! All three had a blast and Hops definitely approves of the beach! We then drove the rest of the way to Rockaway Beach where we were staying and the dogs had two more long runs on the beach. They met some new human and canine friends and ran and ran and ran! Hops even played with a frenchie he met. We were hoping they would be tired when we came in and Rice and Dillon were, but not Hops!