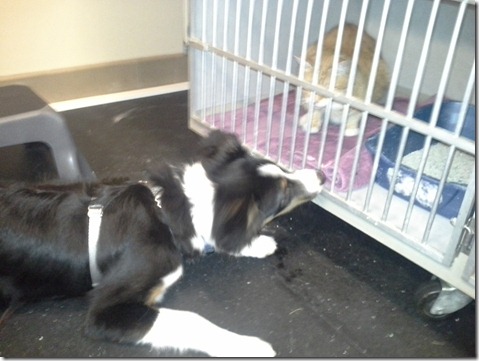 Hops went to work with me and we had a nice play time before the first class, running around the agility arena, doing chutes and tunnels and tables, and stays and comes and running through jump standards, all for tugging as the reward. What a fun boy he is! He was a good puppy during the day in his crate and had a short fun play time with Taffy and a young dobie. After work Rice had an appointment with Ken for laser treatment and Hops came along. He was good in the exam room, checking out the new environment. When he went into the room where the underwater treadmill was he was a little unsure but still explored on his own. Ken opened up another room with more things he had never seen before and he tentatively explored that room too. It is cool to watch him concur fears. And speaking of fears, there were some very friendly cats being boarded in the rehab room. Hops sniffed the cage a few times but was a little wary of them.

Jeremiah worked with Hops again before bed and did peanut work and recall to heel and sends and Hops did great with them as usual.