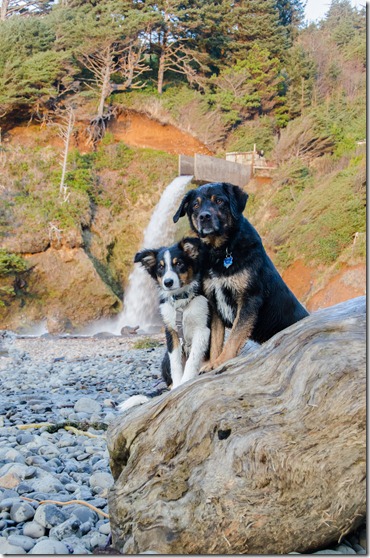 Alright, we think Hops is a keeper! He has been great on the trip so far. This morning we started our day with a hike (Hops’s first real hike) and boy can this 25 pound puppy pull! He pulled me right up the beginning of the trail and later when I dropped his long leash he would run up the trail then would stop and check in or come back whenever we called him. He was great with all the people and dogs we met on the trail too. Then we went to the beach and the dogs ran and played. Hops fetched his first stick and he even swam across a large stream when the rest of his pack crossed it. He cried at first when he was left on the other bank but then he got brave and followed us! He did that several times today in different places. The boys and I would cross a stream (me walking over a log or attempting to jump over the stream, Rice and Dillon walking or swimming through it) and Hops would cry when he was left then get brave and join us. The only time he did not was when he climbed up on a huge log then could not find a way in. I went back for him that time. Hops just loves running on the beach though, and chasing the boys. He also seems to love climbing on anything he can and seems to like posing for the camera too! What an awesome puppy he is! His recalls today were great, only needing a second cue every once in awhile.

Before bed we did nosework in the condo. Hops is just amazing! He went right to all of the hides, put his nose on them, then sat or downed (depending on the height of the hide). Wow! No problem searching in a new location!