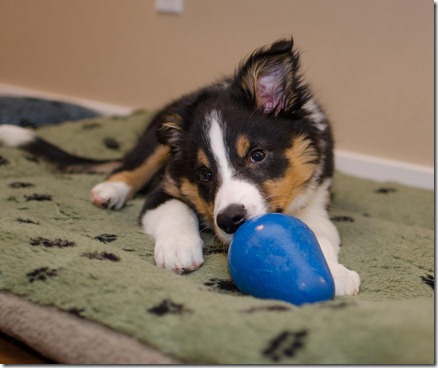 Hops was a very good puppy and let us sleep in again this morning. Now we are paying for it though as he is chock full of energy! Time for a play time! So I brought out a rabbit fur toy that he had never played with and played tug. He loved the new toy but was still able to drop it on cue. I then had him do sit stays while I wiggled the toy and ran away with it. He broke his stay about half the time so I might have made it too difficult but he stayed focused and never seemed to get close to quitting. By the end he was able to stay while I ran about twenty feet away while wiggling the toy. I then did some recalls with the toy as a distraction. I led out, faced away from him with my left hand out and my left shoulder turned back so I was looking at him over my left shoulder. I then wiggled the toy with my right hand and said Hops come! If he came to my left hand, the hand I was cueing him to come to, I brought the toy from my right to my left hand and played tug with him there. If he went to my right side to get the toy I raised it up out of reach and started again. I also tried having the toy a little behind me and to one side then calling him to the other side. If he came to the side I was cueing I turned away from him (pull) or towards him (front cross) and when the toy was in front of me I released him to it. I could see him thinking, working this new game out. He is such a smart puppy!

Hops is such an amazing nosework dog! We had some friends over to play and boy did he show off! He did great with searching both in the garage for the first time and with luggage for the first time. He even downed at the odor bag the second time through. Then we did five interior searches, one hide in each room. The first was under a mat, then under some weights, then in the handle of a trash can, then in a toilet paper roll, then on a crate door. Hops was one of the faster dogs for all the hides, some he went straight to and downed! Wow! I cannot wait to trial with this pup!

As usual, Hops had a training session for his dinner. We started with backing onto a two inch high box and worked up to backing about six feet to it. He had good duration tonight, staying with his back two feet on the box about two thirds of the time. He did great if I put a cookie out of reach, staying on the box until I released him. Then we worked on going around a bigger stool than last night. The behavior really seemed to click for him tonight. He was easily able to move eight feet away from me to go around the stool. I started to name it around by the end of the lesson. I grabbed the metal dumbbell next and he did great taking it from my hand, then I switched to a lighter one and worked on him picking it up from the ground. He made more progress with this, lifting it up over a foot to my hand about a third of the time. He took it in his mouth every time, it just did not always get as far as my hand. Then we practiced some pushups, in heel with me standing, then roll, then say hello. Whew! We ended with shaping heeling with distractions. I put him on leash, put some kibble on the ground near him and waited. When he moved toward me (he did not do this right away!) I said yes, rewarded by my side and took a step. In the beginning he immediately started staring at the treats again but I just waited every time for him to move closer to me. When he started to move toward me sooner I started taking a step before rewarding him by my side. If he gave me a really good response I rewarded by my side then released him to eat the kibble on the floor. He is a good puppy!