Hops had a busy morning at work with me. I went in early to play with him. We started with tugging then I had him sit and stay while I let out, called him to my side and played tug with him. I did that a few times on both sides before adding in the distraction of the toy dangling in my outside hand. If he came to my inside hand I rewarded by brining the toy over to him. Then I raised criteria again by putting the toy on the ground behind and to the side of me. When I called him, if he came to the side I was cueing I turned away from him (pull) or towards him (front cross) and when the toy was in front of me I released him to it and played tug. He made a few mistakes but seemed to remember the game from yesterday and made the correct choice the majority of the time. We then practiced the tunnel. I started with it straight then slowly curved it, running the outside and rewarding him by tugging when he reached me. He always turned the correct direction coming out of the tunnel and boy is he getting fast! He also taught himself the chute. I was setting it up for a lesson and he went through it! So I rewarded and we practiced the chute, tossing his toy forward as he came out. Smart puppy! We then did a small sequence involving a circle of two jump standards, the tunnel, a tippy board, the chute and the table. He did great and really seemed to love going from obstacle to obstacle! We then practiced heeling and moving sits and downs and he did great with those. I ended the lesson with sending him around a tall trash can. He did a great job and I was able to run away from him and he still went around before chasing me, good puppy! Next Hops had nosework class where he rocked! He did flowerpot container searches for the first time and he had no problem generalizing and searched right away. Then we did interior searches. He found the odor on two different table legs, on a low ledge on the wall, on a walker, under a mat and a threshold. He is great! Hops was perfect in his crate for the two lessons and class I had next. He greeted the klee kai, shiba and frenchie in the last class and was much more confident with them. 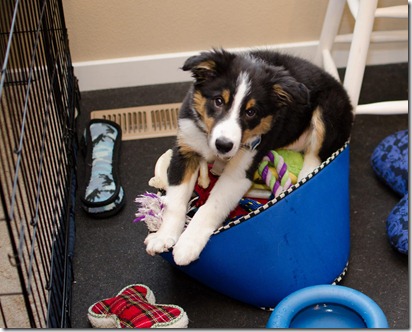 Hops did great during my second shift at work too. We played before my first class then he slept through that class. He was in the next class, week three of fun and focus one. Because of the weather and illnesses, only one other puppy showed up, a nice sheltie named Zane. Well, he and Hops were a perfect match and they played and played before we started class. So fun to watch! Class started with crate games, working on duration, distance and distractions to their sit stays in the crate with the door open. Hops did great and Jeremiah was able to run all the way across the room before releasing him. Hand targeting was practiced next, then we introduced touching a target plate and sending them to it to touch it. Both puppies played on a tippy board then and banged a teacup teeter, neither having any fear! Next going around a cone was shaped and both dogs did so well they also learned to go around large trash cans. Jeremiah said that Hops went around clockwise better than counterclockwise. Then came quick sits and downs with release to play and they did great. Then the 1-2-3 game (sit stays with distractions). Both puppies did so well again that we added in the distraction of a toy on the floor, behind and on the opposite side of the handler the puppies were being called to. They both did a great job working through the distractions! Fun class!

For dinner Hops did pushups and did a good job : )