Hops had another big day today. It started with a visit to my parent’s house where he explored their yard, then we went to Sumner and took a long walk along the White River. Hops walked across a bridge going over the river and was not phased by it. He pulled some of the time (he was in harness so it was allowed) and offered me attention much of the time, which I of course rewarded. After the first part of the walk we came to a safer fairly secluded section and we let all three dogs off leash (Hops was dragging his leash). We recalled the dogs over and over, rewarding them when they came (and they always came) and then releasing them to go play again. It was very cool to see all three boys off leash and responding together. It started to rain so we headed to Dog’s World to do some interior searches. Hops did four different areas two times each. Both of the bathrooms and the kitchen area had one birch hide and the office had a birch and a birch/anise hide. Hops had no problem finding any of the hides, even ones over his head. Very good puppy! Hops then went with Jeremiah while he cleaned out his car and I taught a lesson. Jeremiah said he did well and the vacuum did not bother him. After my lesson, we called the boys back and forth for treats in the arena. We found that when the boys are involved Hops chases them versus coming to us. He gets near us because he is chasing the boys but stops at a few yards away. We were able to get him to come all the way in but it took some coaxing. After a little while we put the boys on a stay and just called Hops and he was great, running in a straight line back and forth between us when called. We will have to work on being able to do that with the other dogs running. Start with just Rice maybe…


Hops practiced push ups, perch work and getting all four feet on a small blue balance disk for his lunch.

A new playmate for Hops came tonight, a 6.5mo old bichon/shit tzu puppy. So far Hops has been a little too much for her but I am sure they will be playing like crazy tomorrow. Hops had a treadmill lesson and was afraid to begin with but gained confidence as he went and was able to speed up a little. We then did peanut work and had all four dogs doing pushups, turns, lifting paws, and doing hand touches all while balancing on the peanut. Hops even got to the point where he could jump up onto it on his own, wow!

Before bed I played tug with Hops and tried the puppy leg jump bump game. I sat on the ground with my legs spread out, held him on one side and teased him with his toy on the other side. If he jumped over the first leg, landed, then jumped over the second I let him have the toy and played tug. If he jumped both legs at once (he only did that the first time) I removed the toy. Then I put my legs together and had him jump both for the toy. I was able to go back and forth between cueing extension (legs together) and collection (legs apart) with no mistakes. Very cool! We ended the session with more tug. I was able to engage Wen on one side with one toy and play tug with Hops with the other hand. I had to redirect him back to his toy a few times because he wanted to get Ren’s toy but for the most part he was able to focus on playing tug with me. A great distraction to work through! 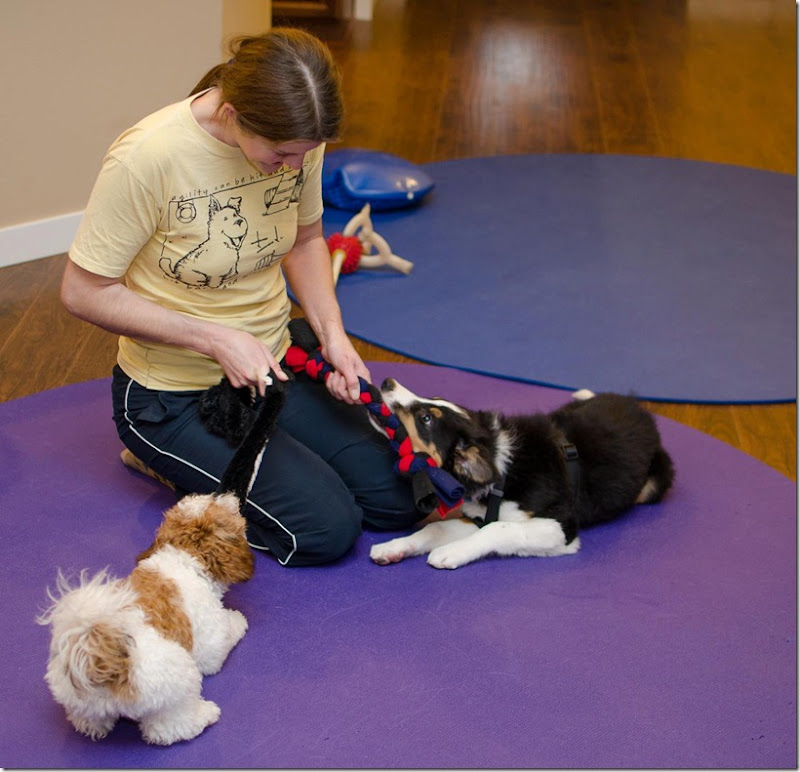