For breakfast Hops had a backing session and did a great job backing in a straight line and picking up both his back feet several inches onto a plastic box. He could stay in position with treats being tossed until released. He and Ren played like crazy this morning! She is being picked up tonight and I know Hops will miss their games of tag!

Hops went to work with me today and stayed crated in the car for the most part to keep Ren company. I did bring him in during a break and played tug with him. We ran around the ring together and I had him do tunnels, chutes and tables for the toy. Fun puppy! What did not go well was putting him in his crate and working Rice after playing with him. This is the first time he has barked and not quieted when I asked so I removed him and put him back in the car so he could not rehearse it. I guess more training is needed after he gets riled up! 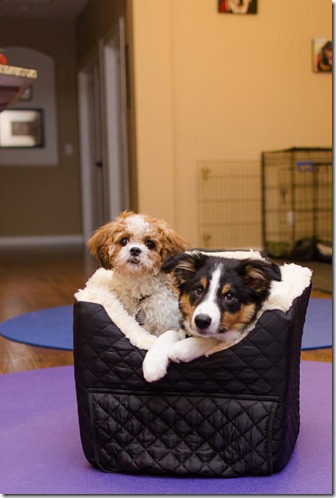 For dinner Hops had a training session starting with stays with distractions. I told Hops to stay then called Rice to me. If Hops stayed I went to him and rewarded him, if he broke position I just brought him back to where he started and tried again. Sometimes of course I called Hops and rewarded when he came to me. He made some mistakes but made correct choices most of the time. I then tried position changes with a little distance. I put both Rice and Hops on the big mat by the back door as a boundary for them, asked them to sit, took a step back, and cued a down. That was easy for them and continued to be even if I stepped several feet further back. Going from a down into a sit was much more difficult and Hops could only do it if I was no more than a foot away. Stand he could do from a few feet but he moved forward a little when doing it. Something to work on! Then I had Hops do some roll overs and say hellos. With rolling over I am working on getting it on a verbal cue and with say hello the same, but with the criteria of his but staying on the ground and only giving me one paw at a time. He did great with both of them. Then we did some heeling around the house with the four basic turns and with moving sits and downs. He did a great job with all aspects of that. To end with I practiced recall to heel with food behind me and on the ground as a distraction. I mixed up what I did after I called him to me. Sometimes I turned (away or towards him) and released him to the cookies on the ground, sometimes I rewarded in heel then turned and released him, sometimes I rewarded in heel then asked for a few position changes before turning and releasing him. He was a very good puppy!