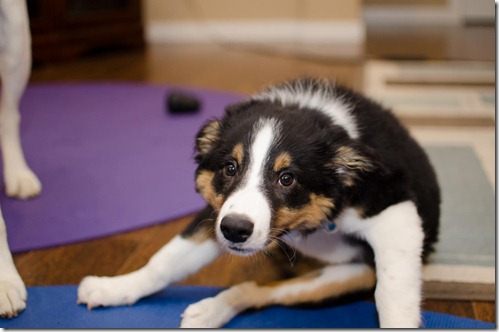 Hops had another long day at work with me today. He was an angel when crated, never fussing. Throughout the day between classes he played tug with me, heeled, stayed, did the tunnel, ladder, chute, tippy board, table, greet people and dogs and probably more that I am forgetting! He was a very good puppy all day. After classes he played with a bichon mix named Sadie and had a blast.

Later Hops went with me to agility class so he could see Elinda and Love. He is always so happy to see Elinda! When I was not running the boys Hops played tug with me, greeted people and dogs, climbed on stools and heeled around.

For dinner I had Hops practice going to a mat. For this lesson I added the cue bed and worked on sending him from different places around the room, working to about fifteen feet away. All but once he stayed on the mat until released. The only time he did not down right away when he reached the mat is when I was out of sight. He went to the mat then looked for me. A couple reps of that though and he was doing the complete behavior out of sight. Good puppy!

Jeremiah bought a really cool vacuum robot called a neato. All the dogs were interested but wary, all sat down and watched I for awhile. Hops was the only one who eventually went right up to it. We even had to start to tell him to leave it. I bet if we did not supervise him around it he would make it a toy!